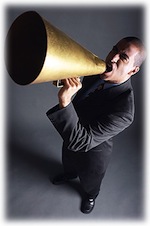 One of the less-desirable facets of social media is the tendency of Web denizens to endlessly promote themselves. The way in which services such as Twitter and Facebook are designed certainly encourages this type of behavior. It is a very annoying trait, regardless of the goal that the user has in mind. And in all of it, there is a certain amount of obvious bullshit.

There are two main groups of guilty parties. First, there is the online entrepreneur, always out to sell you something, always trying to get you to buy into something. These people are simply spammers and are generally very obvious. Most of their posts are links to something that is business- or profit-related. And most of us just sigh and turn them off.

The other online self-promoter is more insidious, and in my mind, much worse, for what they are promoting is themselves. Virtually (pun intended) their every post on every social media site is intended, in one way or another, to show how perfect they are or how cool they are, or both. Either way, they are just a drag. “Look at me, look at me,” they shout all day, “I’m cool, I’m so cool! You have to be my friend!”

They are not that great. Nobody is. They tell us all the wonderful things they do. They even make self-deprecating remarks to make them look modest, all the while blowing their own horns. It makes me nauseous. Promoting their own coolness tirelessly is also a major drag for al the rest of us. Like most people with horrid habits, they don’t even seem to know they do it.

Really wonderful people do not have to promote themselves; people notice how wonderful they are just by watching what they do. The constant self-promoters are clearly unable to walk the walk, so they just do the talk. Cool? Cool is fads surrounded by hype surrounded by spin surrounded by lies, all buried in the humus of the bull. To the persons in question, it is often also about making fun of everyone else, which they can do, of course, because they are so, so cool.

News flash, would-be wonderful, cool people: Both “cool” and “wonderful” are definitions that are rendered unto people by others, not whatever a person decides to tell us about himself.

That sort of behavior is fairly common in human children and young adults, and with older people who never outgrew the purely ego-centric personality. It is often caused by much deeper feelings of self-doubt and low self-esteem. Therefore, I should probably feel sorry for them, but I just can’t. They are just too annoying.

Worse, the social networking infrastructure is such that people are rewarded for being totally self-centered. Clearly, that makes it easier to fall into the bad habits that make them so tiresome to the rest of us. They have always been around, in real life. They have grown in number in the virtual world since they can hide behind the shield of anonymity that prevails on the Web. And now the Facebook and Twitter cultures are teaching a whole new generation that it is perfectly all right to say nothing that is not an announcement about themselves, generally in the interest of self-promotion.