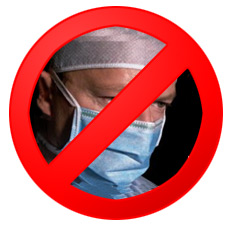 After being frustrated by physician inaction for six months, I finally kicked some ass. I fired two doctors and put the other one on notice, then made a specialist appointment to check the last one’s work. At the end of all that, I finally got the action I needed in finding a hypertension med that did not kill me with side effects and a diuretic with minimum side effects to relieve the massive edema caused by having very high blood pressure for months while the doctors had their heads up their asses.

After much research, I insisted on a specific hypertension med and took the GPs suggestion, after much discussion, for a temporary diuretic. My blood pressure is down from 192 to 145 after just a few days of the new med. The only side effect seems to be that I am in a good mood. On the edema front, I have lost 12 pounds of water weight in three days. Obviously, I feel much better.

This is a cautionary tale. If you are letting a physician, or a group of physicians, manage your health care rather than managing it yourself, you are playing the fool. The American medical care system is built to make sure your medical costs are high and that you buy lots of drugs, not to curing any ills you may have. Nobody in this equation but you really cares whether you live or die, except that after you are dead you are a poor source of revenue.

If you have not already done so, take control of your health care, starting now.