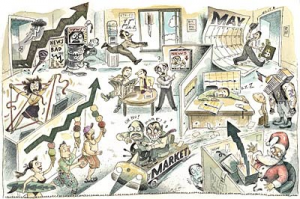 Looking for the biggest baddest bad?

Nope, this time I was looking the baddest thing with the greatest effect on the most people. Your mileage may vary, and even I might come up with different culprits on a different day. Today, however, my thoughts ran to this baddest group of people: All those who wish to impose their wills on then rest of us. More simply put, those groups of people who require that they be able to tell everyone else what to do.

Instead of a single group, then, you have to acknowledge multiple groups. Here are the largest:

1. Politicians- Most politicians are greedy and unethical. Many politicians are corrupt. But those are just the routes politicians take to gain the ability to tell people what to do. Politicians will do virtually anything to get elected and then get re-elected, hopefully to higher office, so they can tell more and more others how to live their lives. In the main, politicians are controlled by the next group in the list.
2. Corporations- Legally, these are an odd sort of person, i.e., those with the rights of people but not the responsibilities. They are in business to fleece we the people out of the most money while at the same time doing the least possible good, thereby maximizing profits. The marketing efforts of corporations are probably the largest extant campaigns to control, in considerable detail, what people do.
3. Religions– Religions go about it the other way. They insist on telling you how you should think. This is perhaps the most evil group of all. Please note that I do not include religious people in this baddest group. Generally, these are good people who have bought into the concept of controlling other people without really thinking about it. The evil is confined to the hierarchy of rule-makers, enforcers, and marketers of the organized religions, who have thought about it and who reap the profits, in power and money, of telling large groups of people what to think and how to live. And incidentally, how to vote, how to hate, how to discriminate against others, how to wage war (societally and militarily), and how to pervert ethics.

As I said, you mileage may vary. But I would ask you to first check on how many of these groups control you, and thus whether or not you can be anything close to rational about this question.