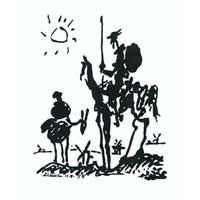 When the race goes most often to the shallow and the loud, when integrity and ethics matter not, is it acceptable to resign the field and walk away? When all around is wilderness and Philistines, is there any point in staying the course? When the windmills are covered in advertising, should not one put away the rusty armor and lance, and walk alongside the horse in search of cool, still waters?

What point is served when my ears are deafened by self-blown horns, my scruples are sullied by the narcissistic minority which feels that manufactured cool is the only meaningful end, my mind is besieged by those whose best efforts are aimed at glorifying themselves while demeaning others, my intelligence is insulted by the eighty percent who do nothing of import, and can only venerate the boastful and self-important?

It is clear that I was  born in the wrong century, or the wrong dimension, or the wrong universe. I value intelligence, quiet competence, unadvertised charity, the pragmatic, the esoteric, quality over quantity, building up over tearing down, a logical left brain, a creative right brain, and balance. I am certain that my value is minimal when compared to the universe at large. I know that I can control only myself, and that only with difficulty.

It is not that I am spectacularly unworthy. It is rather that I am conscious of my relative worth, understand upon reflection that I am but a tiny speck of protoplasm, short-lived and consigned to a backwater. I aspire to ignore the pompous and the asinine, to pity the builders of shrines to themselves, to lament the sheep who can only follow, and to deplore the arrogant who feel qualified to lead.

Knowing that I am a relatively competent human being, even though that counts for little in the grand scheme, should be its own reward. Observing the loud, the arrogant, and the self-righteous for what they are should insure my understanding of the rewards of the fool, and give some comfort to life in a minor eddy. However, among my many failings is the occasional need to cry out in the darkness, to lament the status quo, to climb back aboard the sway-backed steed and to fly the banner of reason.

Those sorties are short-lived, at best, because the pretenders are legion and I am but one, too proud to capitulate, too stupid to retire with grace. With wisdom, I would negate the advice of John Donne, pare my life to the minimum, retire to an island, and pull up the drawbridge for good and foever. When you have sought everywhere, and belong nowhere, lonely discretion may be the better part of vainglorious valor.