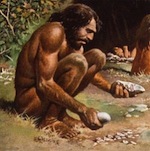 All grandfathers, since the dawn of the human era, have looked upon their grandchildren and shaken their heads sadly. Each successive generation appeared, to its immediate ancestors, as if they were spiraling out of control and would come quickly to a dreadful end. Along the entirety of that historical tapestry, the grandfathers had been mostly wrong.

However, as the twenty-first century finally got the wind into its sails and charted a course, it began to appear as if the most recent generations of grandfathers had been correct, though not precisely so. It was not the latest generation that was leaping en masse into the hand-basket to hell; it was everyone.

Society, which had been semi-selectively building the new upon the shoulders of the old for thousands of years, was at long last beginning to sag under the accumulated weight of human frailty, accrued errors, and conventional wisdom. No one activity or situation could be singled out as that tragedy that would begin the downfall of mankind. Rather, humanity had finally constructed weapons, technology, and social systems of sufficient complexity that any one or two among thousands of critical factors could put the entire species on the slippery road to extinction.

Consider that thousands of scientists worldwide, many of whom were without adequate supervision or ethics, had the power and technology to change genetic structures at a whim, for good or for evil. Additional thousands of technicians had ready access to biological agents that could arguably do even more damage than a malevolently altered genome. Yet more thousands had ready access to tremendously powerful explosives, both nuclear and otherwise.

These groups formed but the leading edge of a catastrophic technology that could be made available to a different group composed of thousands of psychopathic radicals of all stripes, for a price that the psychopaths were willing and able to pay. Eventually, there were so many varieties of psychopathic radicalism that it became difficult for any single member of even a centrist society to browse through the list without finding a radical philosophy with which they could sympathize.

Terrorism, always closely associated with radicalism, had flowed between peaks and valleys of semi-random destruction since the last few decades of the Twentieth Century, but each successive wave had peaked higher than the last. It seemed that awaiting the end was a simple matter of watching the seconds tick away before the last few members of the last few radical groups left standing had finally destroyed each other and all of humanity in the bargain.

What had happened to the societal control systems that had worked at least moderately well during centuries past? Certainly, as the population had increased in both numbers and complexity, the simple expedient of watching over one another’s shoulders in small simple groups had become impractical. Further, since the beginning of the industrial revolution, knowledge had increased so rapidly that no one, regardless of their level of wisdom, could watch over even a small percentage of human activity.

The corruption that had attended the Pharaohs and the Caesars became ever more bold and widespread as greater societal complexity made it simpler to hide the chaff among the wheat. Those with power and money could use them in combination to control the technology and social super-structures that fed them. Too many elected officials cared too little for the citizens that they had been elected to represent, preferring any path that would lead to reelection and thus the continuance of power to be twisted towards their personal ends.

More and more politicians each decade, frequently in collaboration with the bureaucrats that they appointed, became increasingly greedy, arrogant, and short-sighted. Those at the top had always suffered myopia when trying to look at those on the bottom. The view became murkier with each passing generation until those from on high could no longer connect in any way with the mass of humanity that they were sworn or crowned to serve and protect. It was much easier to simply get on with fleecing the great unwashed.

The powerful men of business and commerce, a dubious lot throughout history but sometimes respectable nonetheless, had at last joined figurative hands with the elected officials and bureaucrats. It all came down to money and eventually they wanted all of it, preferably sooner than later. On every front, the distance between the highest strata of society and the lowest increased dangerously while fewer and fewer members of the public were able to afford to occupy the mid-layer buffer that had historically eased the tension between the extremes.

These societally destructive tendencies had become so pervasive over so long a period of time that the vast majority of human beings placed them in that long list of items that were totally beyond their ability to control. In doing so, they unwittingly consigned themselves to suffer in silence the atrocities perpetrated by the elite few. It finally had become easier to quietly surrender than it was to fight back.

Looked at from the other end of the long, well-guarded tunnel between the extremes of society, things were bleak indeed. There was not enough money at the bottom. In more cases each year there was not enough food. And, increasingly, those on the very bottom rungs were without even potable water or reasonably healthful air. At long last, the three most basic components of life were in short supply for a significant percentage of the world’s population.

It was a situation tailor-made to steal away the hopes and dreams of millions of people at or near the bottom of societies in all parts of the world. Simultaneously, these same unfortunate citizens of Earth were constantly exposed to the relative riches of others by a burgeoning popular media that was unable even to properly identify the reality that it had undertaken to sell. The result was predictable: envy and its close cousin, hatred.

By the end of the first quarter of the 21st century, a small percentage of the elite were determined to extract the last penny from the masses while an equally small percentage of the disenfranchised were determined to destroy everything that they could see but could not obtain. Meanwhile, and perhaps of the greatest import, the vast majority of the population simply no longer cared.

Society had at long last perfected an simple cookbook recipe for disaster.

As if the societal situation were not sufficiently dangerous, the damage that mankind was capable of doing to the planet and the havoc that nature could wreak upon mankind were beginning to be truly understood for the first time. The possibilities seemed depressingly endless.

Global warming might yet be “officially” confirmed as a human disaster on a planetary scale, as might the unburned hydrocarbons (and worse) infesting the air and water, plus any number of other environmental disasters in the making. However, environmentalism was at odds with commercialism, and commercialism was winning.

The common wisdom stated that strong economies were built upon the sturdy tripartite pillars of unbridled growth, cheap manufacturing processes, and cheap labor. None of these philosophies were good for the planet or its occupants. The limited resources of the planet could not realistically be expected to sustain growth in the long term. Nor could the planet be expected the withstand forever the damages inflicted upon it by the conjoined twins of greed and apathy.

Even if the excesses of society could be somehow controlled, there remained perfectly natural events that could easily prove wrong those humans who believed themselves to be all-powerful. Every new day brought with it the increased possibility of a rude and undeniable natural catastrophe that cared not a whit for the “power” of mankind.

How long would society last if confronted by an ice age such as Earth had experienced numerous times in the geological past? How large a population and what level of technology could we support if Arkansas, Spain, Argentina, and most of South Africa were covered by hundreds of feet of ice? How much social upheaval would this relatively commonplace planetary event inflict upon the human race?

Leaning in the other thermal direction, how long would our society last at its current level of sophistication if temperature skewed up and not down, as it had many times before? How would we cope if over 30% of our available land surface disappeared under water, taking with it the homes of 70% of the population? Would the heat be more or less disruptive than the cold?

On a much larger scale, scientists had been working for many years to identify the larger pieces of rock which may pose a danger of collision with the our planet. They were always pleased to announce that they had found nearly all such heavenly bodies and were developing methods to protect society from them. In truth, however, that is a task which mankind is never likely to complete.

The entire solar system follows an elliptical orbit through our galaxy. It takes more than 220 million years for one such circuit to be completed. Although the Earth has gone along for this ride many times, modern scientists have not even observed one-one-thousandths of one percent of the galactic space through which the solar system passes on its the way around, let alone the billions of large objects with which our planet could collide along the way, including both other planets and suns.

Science knows of several significant collisions which have occurred during the course of the current galactic orbit. Some of them are known to have wiped out the majority of the life forms that were then on Earth. With another 220 million years to go before we can even hope to properly catalog dangerous space debris, how can mankind ever declare itself immune from catastrophic collisions?

Taken all together, the risks to humanity are great, whether natural or man-made. The more that is known about these dangers, the more likely they are understood as likely to trigger the next logical level of our “fight or flight” instincts. When it happens, our species will develop an insatiable hunger for the acquisition of territory on other local planets and around other stars, probably too late to help.

The eggs of humanity are fragile and the lone basket in which they currently reside is becoming statistically less safe with every passing day.