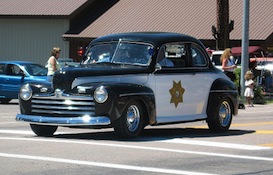 I have often wondered why aggressive, dangerous driving is becoming more prevalent than it once was. A case in point is the Philadelphia commute hour, where I would not be surprised to find machine guns being used to blast a way through traffic. As interesting as this is as a social observation, I find it even more interesting that law enforcement wants no part of even trying to make the commute safer.

This latter observation may be part of the reason why the former issue exists, but I doubt it. I think the aggressive motorist came first, and I think he is the way he is because he (and almost everyone else) has no respect for their government, and further that their government has earned that lack of respect.

Every week seems to bring with it another crime by a senator or congressman, and even those crimes have needed to be heinous indeed in recent years to merit the culprit being singled out. It’s not hard to see that most long-term politicians leave office these days with more money than they came in with; it’s not too hard to see beyond the wealth to the methods. We are more than used to watching our politicians bickering like small children, while at the same time saying almost nothing of value.

These sorts of things trickle down, though Reaganomics never did. Watching the sideshow that is our government today being controlled by lobbyists so that the politicians can get more money to be re-elected turns a lot of stomachs. As importantly, those that don’t even notice the details can still absorb how obvious the lying, cheating, and stealing have become.

There are a few ever-present reminders of government around us in our daily lives.  One is the road construction or repair that blocks our way several times a day, all those places where there are orange cones and expensive equipment, but often no sign of any actual work being done. Another is the police car, a sort of a friend / enemy, depending upon whether we are speeding or in need of assistance.

As for the morning Philly commuter, the police are just in the way, regardless of their jurisdiction. Once it became clear that government officials were much less than pristine examples of authority, the authority of law enforcement began to go the way of the wild goose. With all respect lost, the doctors, stockbrokers,  lawyers and other workers in downtown Philly feel free to do whatever they want, however dangerous or reckless. If the lawmakers won’t follow the laws, why should they.

The police seem to not even be trying. Given that there are somewhere between 2 and 4 sworn police officers of all kinds for every thousand citizens, maybe discretion is the better part of valor. So the commuters feel free to drive 90 miles an hour, or 16 inches from your rear bumper, or worse, while the police have apparently given up any possibility of reversing the trend.

The mentality of the Philly commuter is creeping into other areas of our lives, as well. I would guess that as respect for elected officials wanes, there will be more cheating on taxes, less teaching of ethics to children and youth, more “excusable” crimes depicted in our entertainment media, less attention paid to citizenship, more attention paid to personal greed, and so on.

One wonders where it might end, this disrespect for our government. Just now, it suits the major corporations that keep the government bought and paid for. We are less likely to complain about what we no longer respect. Perhaps, though, the citizenry will finally tire of having a government that they can’t respect. On that day, when they are finally pushed over the edge, we would all do well to remember that British government that we could not respect 300+ years ago, and what happened to them.